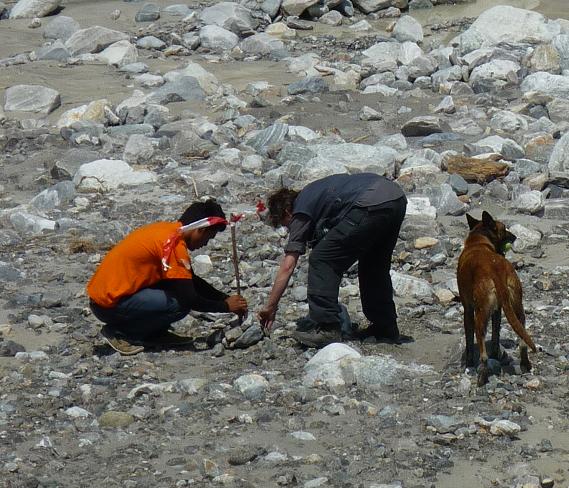 Kathmandu, Nepal (CNN) — Rescue workers continued their search Monday for survivors from a flash flood in central Nepal that swept away houses over the weekend, killing at least 17 people and leaving as many as 47 missing.

The authorities are using sniffer dogs to try to find the missing people and excavators to clear debris, said Sailesh Thapa, police superintendent of Kaski District where the flooding occurred.

The flooding took place near the Annapurna range of mountains, a part of the Himalayas popular among hiking enthusiasts. Three Ukrainian trekkers are among the missing.

The likelihood of finding any survivors is diminishing quickly, though. Thapa said Sunday that the chance of finding any of the missing people was “extremely minimal.” Of the 17 bodies recovered, only 12 have been identified, he said.

BHARAT KOIRALA/RISHI BARAL
2012-05-09 -The Himalayan Times –
KHARAPANI: Shanti Gurung (31) is roaming Kharapani area on the banks of the Seti in search of the body of her husband, Indra Bahadur Gurung, who has been missing since Saturday, the day the river burst its banks.

Shanti, who has not eaten anything for days, says she has lost hope of finding her husband alive. “I would console myself even if I could find his body.”Her ten-year-old son Santosh, injured in the flood, is in hospital. “I have heard that government is distributing relief but I have yet to receive anything to make my ends meet,” added Shanti.

Shanti’s family is one of the many families that have lost their bread winner in the flood. As the body of many missing since the disaster are yet to be found, their keen are having a hard time making their ends meet. The government only provides relief after seeing the dead body, they say.

Shanti’s husband and father Kedar had gone to the river early in the morning for work. Ten-year-old Santosh had followed them. “My husband threw my son out of the floodwater. But, he could not escape,” Shanti recalled. Flood swept away her father Kedar as well.

Similar is the story of Fulmaya Tamang, who has performing the final rites of her husband Mandhowj Tamang. He has also been missing. “I performed the final rites after losing hope that we’ll be able to recover his body,” said Tamang.

“I am having a tough time as the government does not provide relief unless the body is recovered. I call on the Red Cross or any other organisation to provide me some food,” Shanti pleaded.

Seti death toll reaches 27
MANOJ ADHIKARI
POKHARA, May 9: One more body was recovered Wednesday taking the death toll in the Seti flashflood to 27, while 43 persons are still missing despite mobilization of around 600 security persons.

Kaski Police said one decaying body of a foreigner was recovered from the canal of Seti Power House near Nadipur. Three Ukrainians were also swept away by the Seti flashflood on Saturday. The body of Indra Bahadur Gurung, 46, of Sardikhola-7 was identified Wednesday, but seven bodies are yet to be unidentified and have been kept at the Western Regional Hospital.

Two hundred fifteen personnel from Nepal Army (NA), 190 from Nepal Police and 208 from Armed Police Force (APF) have been deployed in the search operation along with excavators and bulldozers to look for bodies buried under the mud and rubble. But security persons have given up hopes of finding the missing persons.

“The mud must have buried the bodies very deep while others could have been swept far away,” an officer involved in the search operation said.